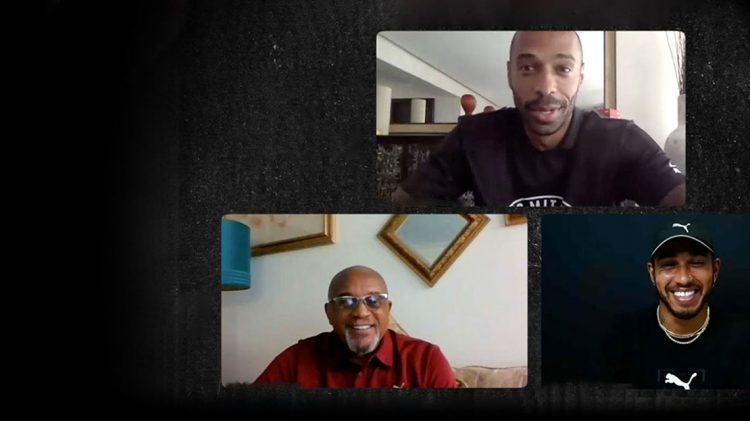 We brought together three of our best-known ambassadors, Formula 1 Champion Lewis Hamilton, Olympian Tommie Smith and football legend Thierry Henry, to have an honest conversation about racism.

More than 50 years ago, when Tommie Smith raised his fist on the podium of the 1968 Olympic Games, he risked everything to stand up for universal equality. At a time when racism and police brutality against minorities once again dominate the headlines, the panel of PUMA athletes talked about their experiences with racism, activism and their hopes for the future.

The topic of the talk was “Is Anyone Listening?”, a quote by Tommie Smith in which he expressed his disbelief that so many years after his silent protest on the Olympic podium, racism was still an issue around the world.

“At some point, people didn’t see my color anymore because I was playing football - when I went somewhere where people didn’t recognize me, my color came back.”

Six-time Formula 1 World Champion Lewis Hamilton also talks about his experience as the only black driver in the predominantly white world of Formula 1, while Tommie Smith outlines his vision for an inclusive future.

“We knew it was imperative to highlight the stories of our athletes and ambassadors and bring them together to exchange personal stories, ideas for change, and educate the wider community,” said Adam Petrick, PUMA’s Global Director of Brand and Marketing.  “We’re thrilled to give some of our most accomplished athletes a platform to discuss the impact they have made as activists in their respective sport.”

Through our #REFORM platform, PUMA gives its brand ambassadors the chance to talk about causes and to encourage conversations around issues such as universal equality.

Watch the full video below!

Read more
SPORTSTYLE
Install App
CATch up is available as an app!