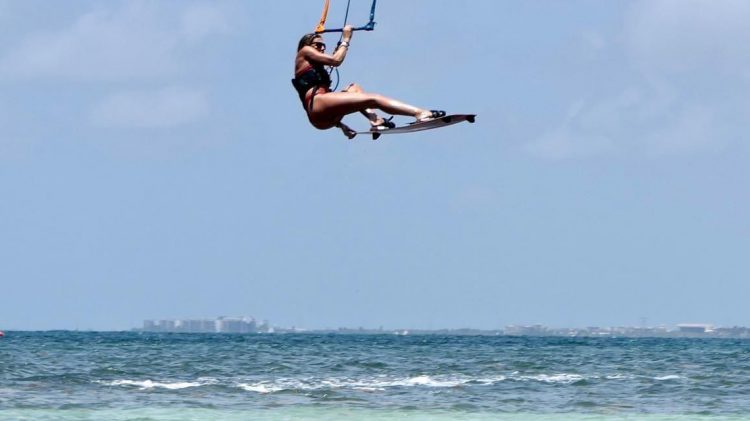 "I like
to fight for
what I believe in"

As part of our SHE MOVES US interview series, CATch Up spoke to Virginie Dubray, Marketing Director at PUMA Mexico about making a fresh start in a new country, gender stereotypes and following your dreams.

Full of energy, Virginie likes to explore the world and make new connections. She has lived in Spain, Germany, France and more recently has moved all the way to Mexico.

“I have been working for PUMA for about eight years. Before, I was based in Germany, now I’m in Mexico. I started in the global marketing department at first. It was an amazing experience. Then I moved to European Marketing Team”.

At some point while in that position, Virginie felt she wanted to do something different but she wasn’t sure what. “I thought about moving to another country. I had been living for six years in Spain prior to my work at PUMA and I enjoyed the Spanish vibe a lot. So I started checking places in Chile but I was still hesitant. All of a sudden, the General Manager of Mexico, Mario Olvera, whom I already knew from the work I was doing for the last few years, told me ‘I have a perfect position for you! I want you to be part of my team.’  That sounded exactly like what I needed”.

It didn’t take Virginie long to accept the offer. “I knew it was the right decision and my colleagues in Germany where I lived at the time, were very supportive”. Their support and that of her family meant a lot to Virginie as she would miss them all immensely, being so far away.

It was a huge life change for her. “Of course I got food poisoning when I arrived because your body needs a bit of time to adapt to all the changes. I had to get to know a new culture, which was challenging but also very interesting”.

It motivated her also to understand consumer trends better. “You have to be careful how you proceed with things as the consumer market is so different. For instance, football is not just the number one sport here, it’s seen as a religion, a complete lifestyle. In order to understand it, you have to dive deep into this world”. Virginie says these consumer trends and other consumer behavior were fascinating to her and that she learned a lot from them.

PUMA Mexico is doing very well, they had the best semester in their history. “PUMA is seen in Mexico as a high end brand, explains Virginie. It has a special recognition among consumers”.

“We are number three on the Mexican market. We are aiming to be number two by the end of the year. We are really changing and shifting our mindset in the team in order to think as a market leader”, she adds.

Virginie’s job oversees all the marketing activities, strategies, all  types of communication and plans for PUMA Mexico. “It’s very diverse and we have a very strong and mixed team. In the managing, we are four women out of eight as well as four foreigners out of eight. That is something I enjoyed finding again. In Germany, it was also multi-cultural and gender equal which I found important”.

Over the years, though, it has sometimes been challenging to be a woman in her field. “I have a strong character and I like to get things done. I also like to dedicate 100 percent of myself when I do something. I have been told that my assertiveness could be challenging for some people, some men”.

Unfortunately, Virginie encountered a situation where people were challenging her capacity as a woman. “They didn’t think I could be in charge of football clubs or players. I was straight away put in this category that because I am a woman I wouldn’t be able to handle this type of work”.

Within PUMA, Virginie manages different football clubs, “and they are extremely important and for the market”. She also takes care of a lot of different football players. “I love what I do and I do understand football even though some people think otherwise because of my gender. It’s unfortunate that some people can still be that narrow minded. Nothing good would have come out of the situation if I had gone directly against those people. I had to prove them wrong and I did. I showed them the experience I had acquired over the years in the field and that I could handle the situation”. This happened only once to her she says but “it stuck with me, I was so surprised by this person’s attitude towards women”.

The people that impacted Virginie the most “are all these women who really succeeded in their job and achieved amazing positions and results in their work”. When she started to work 20 years ago, the field she is in was mostly an area occupied by men. “There weren’t that many women, especially in a managing position. These first women having these types of jobs and high ranking positions were definitely a source of inspiration for me. I was also impacted by amazing strong willed men”. All these incredible people showed her the ropes of the business and some became mentors to her.

Then of course, her mother had a big impact on her. “My mother was a hard worker. She was very sporty and she always dedicated herself to her family and having a proper work balance. She managed very well to juggle many different things at the same time”.

For Virginie, having the trust of her peers and her boss but also her business partners makes a huge difference in her work. “In our team we all listen to one another. Everyone is very much part of what we try to accomplish. My first boss at PUMA was amazing. She has a strong character and is very passionate about her job, just like me. Here in Mexico, I got lucky again. My boss is very devoted and enthusiastic about the work we are doing”.

In her opinion, a good boss is a boss that treats her team properly and communicates… a lot!, she says.

Communication is definitely the key to doing your job properly, in Virginie’s opinion. That’s how her team managed to keep strong ties with one another, she says.

Managing the team is an essential part of her work and she loves that part of it. “It obliges me to push myself and learn new things everyday, it’s a position where being empathic is imperative if you want to do it right. It’s a daily process as well”. What Virginie finds the most satisfying part of managing a team is seeing the members of her team thrive and become leaders themselves. “Helping them find their own path as leaders and giving back is essential in my opinion”, she says.

Virginie claims to be a very forceful kind of person: “ I like to fight for what I believe in and I like to be very efficient at my job”. However, she says she always leaves some space in her agenda to do some sports: “For me sports is linked to your mental health. It helps you disconnect and somehow gives your body a break from being in front of the computer all the time. I think sports also teaches you a lot of values. Nothing is ever done, given or steady. You learn from winning but also from losing. It all gives you strong life experiences”.

The combination of all those different aspects of her life— work, sports, traveling… gives her a “feeling of being deeply fulfilled”, she explains.

The advice Virginie would give to anyone is “’Fight for your dreams!‘ and “Believe in yourself. Find a way to empower yourself. If you don’t believe in the possibilities that could come, you can’t move forward”.

“Then to keep afloat, you’ll need to surround yourself well, she says. That’s how I’ve always survived”. Carrying on, Virginie says “We as women should tell ourselves that the sky is the  limit, we just have to go for it. It is so important that young people, the new generations know now that they can do it and that we as the elder generation encourage that. We have to be examples to them”.

Boxing as a hobby

Boxing as a hobby