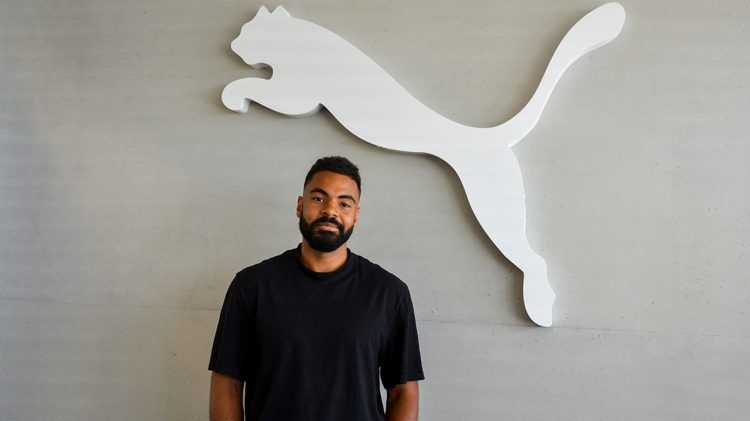 It is
all about
education

Recent events highlighting racism and police brutality against minorities have restarted a global debate about discrimination and equality. At PUMA, we don’t shy away from having this conversation. We believe that our differences make us stronger and we foster a diverse workforce. Discrimination, harassment or bullying in any form have no place in our company and we want to engage in a dialogue with our employees to see where we can do things better.

We caught up with Yannic Akinyosoye, who joined PUMA in 2018 as a Junior Manager Grassroots Teamsport and is now Junior Manager Sports Marketing Germany. Yannic was born and raised in Hamburg, Germany. His dad is from Nigeria and his mom is German. We asked him about his experiences with discrimination in Europe and where he believes things can improve.

Can you tell us about your experience with discrimination?

For me as a young kid it was very difficult growing up in this society. I started witnessing racism early on when I was in kindergarten, school, uni – wherever. In kindergarten, some kids came up to me and said you look like a monkey, you smell like a monkey, you don’t smell good. I wondered, what’s wrong with me? It was really difficult, and I had a hard time. I was not angry but frustrated, frustrated with the situation and I did not know what to do. It was a time when I tried to find my own self, because we flew to Nigeria very often and we lived in Germany, so I tried to find out who I really am. I knew I had to grab something from Nigeria and something from Germany to find myself and be myself. I did not know that when I was young but yeah, that’s how it started.

When the kids said these things to you, did you feel that they learned that at home or did they make it up on the spot?

Some kids were very open, so I’d say it’s all about the education kids get from their parents. It’s about getting to know other cultures and ethnicities throughout the community you live in, the surrounding you have, the friends you have. If you only live in one ethnicity, maybe you never get to experience different cultures. It’s a mix.

Were you the only kid in your school with a mixed background?

Yes. In kindergarten and school as well. I was privileged that my dad was a professor at the University of Hamburg, teaching English and an African language called Yoruba. He was very keen to push me through this education system. Playing football, I got to know kids from other schools, who did not have the parents I had, they did not get pushed. I was privileged to have this dad, who taught me that if you don’t push hard and listen and learn the teacher won’t acknowledge you.

Did you experience racism in school from your teachers?

I was kicked out of class a lot for no reason. I was often referred to as the athletic black kid, who is good in sports but not in class. I later learned that there are studies that show that kids of color are more often kicked out of class. When things get loud, the black kid has to leave the classroom. Teachers tend to have stereotypical ideas of black kids, so that they usually get treated differently.

How does racism affect your day-to-day now?

Because I am comfortable being myself right now, it doesn’t affect me as much as it used to. Growing up, when I went to school and uni, I had some doubts I’d make it. But my dad was right, you always have to be eager to push even harder. I don’t have that fear anymore. Back then, people were very comfortable saying the N-word to me and I used to have a fear of going to classes, working in my student job. I feared entering a room when someone would refer to a black guy with the N-word. I thought: please don’t let somebody say that word because I don’t know how to act. Should I educate them? Should I get angry? Should I get sad? That was my day-to-day back then but now I know how to deal with the situation, and I know who I am.

How do you deal with that now?

I educate them. I read a lot of books about racism and I know where it comes from, I know what it is, and I know that there is a difference between racism and discrimination. So I know how to approach such people. It is not always that easy and sometimes I prefer to say nothing because I don’t feel the need. But when it’s somebody I work with or someone outside, I will educate them that it’s not nice to say that – and its wrong!

I studied in Vienna and Austria is quite different. Getting to know the Austrian system around that was tough. When I searched for a flat there, I was talking to this one lady on the phone. It actually went pretty well until she asked me where my last name was from. I said it was a Nigerian name and that I was born in Germany. She was alarmed and said that in that case I couldn’t rent the flat, because she had a responsibility towards the other tenants in the building and they didn’t get along with foreigners. I appreciate Germany after living in Austria.

How do you see the situation at PUMA?

I never witnessed any racism Inside of PUMA. Working with external partners, it can be a different story. I already mentioned that sports can get derogatory. We had an event where we brought many young football players to our HQ in Herzo. It was very successful and nice, and we got good feedback. But later there was this one agent who called me, and he was furious and angry. He said “How dare you invite only black kids? The parents are offended, I am offended!” It was outrageous and besides, it wasn’t even true and what if it had been true, would that have been a problem? I really wondered how to approach that. My team-head at the time was absolutely on my side. He said: “How dare you say that to one of my employees and make such claims?”

How should we as a company talk about racism?

It’s difficult and I am no expert but from the way I got raised I would say education was a big part, as was meeting other cultures.  I love travelling, I love other people, I love different kind of food – It’s a way to educate ourselves more. Bringing other cultures to the departments is one way of getting to know them. Even I have to educate myself. I have a friend who is a flight attendant and she told me that they have trainings, because they are in touch with so many different cultures and she does not know how to react to them because every nation has different ways and manners. She shared some stories where I said ‘Wow, I did not even know that those cultures act in such a way.’ Maybe for us and for me it’s good to have a diversity day, to have different cultures different food. That would be a good way approaching to this.

I would volunteer to go to schools and universities to tell my story and kind of be a role model and tell them what I went through in this system and I still made it. There are a lot of kids out there who can’t make it, so this could be a way to integrate the community and the culture into our headquarters or into our workplace.

Read more
SHE MOVES US
Install App
CATch up is available as an app!